“The first angel sounded, and there followed hail and fire mingle with blood, and they were cast upon the earth: and the third part of trees was 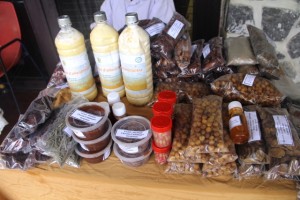 burnt up, and all green grass was burnt up”. Revelation 8:6.

“We are such spendthrifts with our lives, the trick of living is to slip on and off the planet with the least fuss you can muster. Green Cameroon and it environmental protection programs is not running for sainthood. We just happen to think that in life we need to be a bit like the farmer, who puts back into the soil what he takes out.” John Paul II said that, “The earth will not continue to offer its harvest, except with faithful stewardship.” We cannot say we love the land and then take steps to destroy it. If we don’t increase its usefulness, it will result in undermining in the days of our children the very prosperity which we ought by right to hand down to them amplified and developed.

To understand the catastrophic scope of the quotes and verse from the bible, we need to first evaluate the current environmental and precarious food crisis facing our world. The world Health Organization estimate that ⅓ of the world is well fed, ⅓ is under fed, and ⅓ is starving. Since you started reading this at least 20 people have died of starvation over 4 million would die this year.

Every day, 25, 000 people die from hunger-related causes. Every 7 seconds a child dies from hunger. When food accounts for more than half a poor family’s spending, price spikes can truly be devastating for millions living on the edge for example, due to the flood in 2011, the winter wheat crop in Australia has been absolutely devastated.

In this past winter 2010/2011 Brazil was hit by the worst flooding the nation has ever experienced. This has substantially undermined its food production capacity.

Russia, the third largest wheat producer in the world, is still feeling the effects of the unprecedented high temperatures of the summer of 2010. This led to the importing of wheat for the winter of 2010/2011 to sustain its cattle herds.

In 2010, Pakistan experienced the worst flooding ever recorded in the nation’s history, leading to the destruction of harvest. At one point, 1/5 of the entire nation of Pakistan was under water. The impact of this devastation on the agriculture of Pakistan is unimaginable.

China is preparing for a “severe, long-lasting drought” that is marked as the worst drought in six decades, directly impacting the world’s largest wheat-growing region.

Even though without knowledge of the prophesied catastrophic effects, many UN food experts believe that the world is not far away from a horrific world famine.

It is estimated by some that approximately 1 billion people throughout the world go to bed hungry each night Hundreds of millions around the world who can barely afford themselves are going to find it even harder to buy their daily bread.

All over the world, commodity price spikes have been pushing people into the streets. High costs of staple foods have been cited as the catalyst for massive riots in Tunisia, which spiraled into a revolution. When food accounts for more than a poor family’s spending, the idea would be that price spikes can be truly devastating for millions living on the edge leading to malnutrition and other illnesses.

Protest spread to Algeria, Morocco, and Yemen and most notably to Egypt (the world’s largest importer of wheat) which led to the overthrow of the Mubarak regime.

If we give a blind eye to the current precarious food crisis facing our world, our natural resources, and exhaust the land instead of using it so as to increase its usefulness, we will be like a nation that destroys its soils and destroys itself.

Given the world food crisis, the use of local resources like Moringa is critical to reduce the dependence of developing countries on imported goods, and to improve nutrition among poor households not leaving out its positive impacts on the environment. Two or three trees in a courtyard are sufficient for the needs of one family.

With the few catastrophic scopes mentioned above, we really need to examine and evaluate our current, environmental and precarious food crisis facing the world to day before many may understand what is already going on. We should try and avoid a situation where we may be inside a giant car heading towards a brick wall and everyone is arguing over where they’re going to sit. Edward O. Wilson said “People would rather believe than know.” Believing and knowing is not enough try and inspire your local Community.