Green Cameroon was visited on Wednesday the 4th of June 2014 by students from the Antioch University, USA accompanied by Dr. Bechem 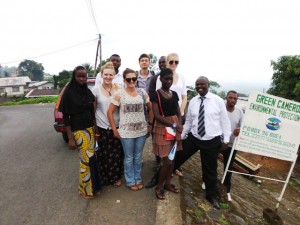 Tambi of the University of Buea.  The visit came under an exchange program between the Antioch University and the University and Buea and a partnership between Green Cameroon and the two institutions. The purpose of the study abroad program is to expose foreign students to diverse learning environments, new ecological setups, cultures and ecosystems as well as take students back to the cradle of humanity.

This further led to him throwing more light on our community development projects like the hope from the farm, Adopt a tree, Green Schools and the Community pig farm project funded by the Australian Government as the most recent. He gave them an update of Green Cameroon’s current and future projects but expanded more on the community pig farm project. Where, he explained in detail the objectives, benefits, difficulties, targeted populations, achievements and what to expect from this project.   After his lectures, He later gave rooms for these students to ask questions where necessary and he responded to them satisfactorily.

They later visited the Community Pig Farm in the Vasingi Village Community of Buea. They were accompanied by the entire Green Cameroon staff where they saw first-hand what was and has been going on in the farm, the species of pigs and piglets found in the farm, their feeding habits, security, sanitation and level of managements implemented.

After been interviewed by young students from the YAN (Youth Action Network) club doing their internship with Green Cameroon, some pictures were taken and the entire delegation thanked Green Cameroon for what they termed a wonderful experience which they had visiting the NGO and the pig farm. They also promised to make the best of what they learned and ensured that they will make an effort to visit again.