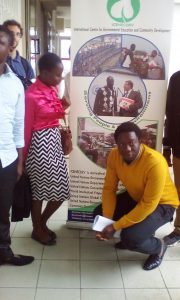 – Discussions in line with Ordos’s declaration following The United Nation Convention to Combat Desertification (UNCCD).
– Desertification is highly promoted by human activities, though a blame is being laid on nature because of the climate changes but emphasis was also laid on the fact that climate has always been changing.
– Factors or methods to fight desertification were also discussed and tree planting was one of the main factors that was critically discussed and attention was brought up on the fact that many people and even organisations have involved in tree planting lately. This is a good initiative but attention was brought on the fact that some tree species when planted tend to cause more harm than good, an example of this as stated by one of the attending professors is the eucalyptus planted around the mount Cameroon region. According to the professor, these trees have highly contributed to the water crisis experience in the Buea municipality. Therefore to solve this problem individuals and civil organisations that engage in a tree planting as a means for environmental protection should always involve specialist in trees before engaging in the projects so that more harm is not caused on our environment.
– Another factor discussed as concern land issues in agricultural practices as mentioned by the leaders of the women farmers is the problem of land acquisition for cultivation with the fast growing population and distance to farm lands. Also pest that affect tubers in some places in the northwest region as stated by a representative of the women farmers from the northwest region.
– Green Cameroon joins this forum to lay emphasis on the call for governments and organisations to invest on dealing with the causes of desertification as well as handling the effect of desertification. (Some of the causes of desertification including; deforestation, bush burning, poor irrigation technics.)
These above mentioned points were discussed in the course of the seminar and civil society organisations were highly encouraged to join in the fight against desertification by working in alliance with the United Nation Convention to Combat Desertification.