Green Cameroon and the Vasingi Community were honoured by a visit 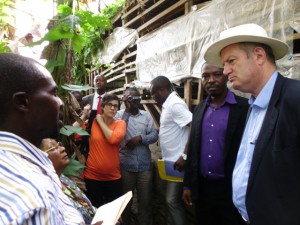 The Vasingi Community Pig Farm project which was the main reason for the visit, was developed and implemented by Green Cameroon as one of its initiatives aimed at providing alternative enterprises to curb poverty levels and youth unemployment in the Mount Cameroon Forest Region of Cameroon.

This project was funded by the Australian Government in February 2014 and launched in June 2014 amidst the jubilation of community members. The community pig farm is expected to serve as a training ground on pig farming for community members and also a source of piglets supply for youths, widows and single mothers of the Vasingi community.

The project was developed with the objectives of, 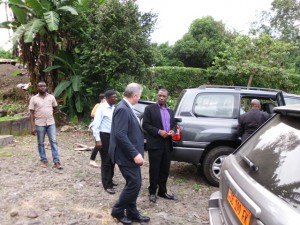 the provision of training and startup breed subsidies.

The aim of the visit was to see how the Community pig farm which they funded in 2014 is doing. The visit commenced by a tour of the pig farm to see how things are running and a formal ceremony which included speeches, presentations and merry making.

Green Cameroon’s Executive Director in his speech expressed his gratitude to the Australian Government for the funded project, explaining how the funds were used, what the achievements had been and also some difficulties faced.

The Project Management Committee Chair Man spoke on behalf of the Vasingi Community and beneficiaries, expressing gratitude for the assistance the project has brought to the community.

The High Commissioner in his speech explained how delighted and satisfied he was with the project, its achievements and the fact that community members came out in their numbers to receive him.

Other items that spiced the occasion included interviews from the press, speeches from other government officials and live music. The Australian High Commissioner and his entourage departed the scene at 5:30 PM with an air of satisfaction and contentment.

It is expected that this visit will strengthen ties between Green Cameroon and the Australian AID program leading to more collaborative programs in future.