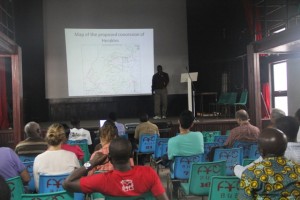 One of the most important cases treated on the Land’s Day during our Green week (8th to 14th of April 2013) had to do with the Herakles case in Cameroon which received a lot of attention from community members.
Mr. Besingi, an activist community leader from the Talangaye village area was invited by Green Cameroon to talk to the people about their case with Herakles farms. The session drew quite a crowd and today, Green Cameroon is proud to have contributed in its own way towards the government’s decision.
On May 18, 2013 Herakles Farms with operations in Talangaye village, South West of Cameroon, announced that it has suspended work in Cameroon in response to an order it received from Cameroon’s Ministry of Forestry & Wildlife (MINFOF).
Being a community based organisation like we are, we strongly see it as a major victory when the voices of the people are head and decisions are taken accordingly. Let us all celebrate this victory of our beloved African Forest and pray for more in future mostly as it just a suspension and not a ban.