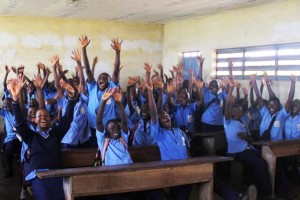 International literacy day 2013 theme is “Literacies for the 21st Century” and 2012 theme was “Literacy and Peace”. Educational institutions and literacy missions around the world commemorates the International Literacy Day on September 8. Endorsed by UNESCO in 1966, this day is proclaimed for disseminating literacy awareness amongst world’s illiterate community.

Literacy is not just about educating, it is a unique and powerful tool to eradicate poverty and a strong means for social and human progress. Green Cameroon thinks the focus of literacy lies in acquiring basic education for all, eradicating poverty, reducing infant mortality, simmering down population growth, reaching gender equality and ensuring constant development, peace and democracy. There are sufficient reasons why literacy is the center of Education for All (EFA). We believe that a good quality basic education equips people with literacy potentials for life and further learning; literate parents are inclined to send their children to school; literate people are prone to access continuing educational opportunities; and educated societies are better geared to keep pace with the pressing development.

Hence literacy is considered as an effective way to enlighten a society and arm it to facing the challenges of life in a stronger and efficient way, raise the level of personal living, create and assist change the society. Isn’t that great? Just what is needed in this 21st century.

According to UN analysis there are close to four billion literate people worldwide and some 776 million people lack minimum literacy skills, that mean one in five adults are yet to literate; 75 million children did not attend school and many more attend irregularly or are drop outs. Almost 35 countries have a literacy rate of less than 50% and a population of more than 10 million people who are illiterate. 85% percent of the world’s illiterate population dwells in these countries, and two-thirds are fairer sex. It’s just amazing that despite many and multifarious efforts, the literacy rate across the world looks alarming.

Several educational programs have been launched by the governments of world to make the people literate. Of course, such literacy programs have become successful, but still a good section of country’s population is still non-literate.

UNESCO wishes to use this day to draw attention to the importance of reading, writing and language. Every year World Literacy Day launched Literacy Week, during which many organizations run self-motivated activities that focus on literacy – in a concerted effort to counter illiteracy. But it should be noted that, making the entire world literate is yet a far-fetched goal. The fact is that without making the entire world literate we cannot expect a global development.

On this special day, join Green Cameroon and let us take an oath to make our country as well as the world literate. It is possible if we take the very first step ourselves by sparing some time for uneducated people living around us. If not, we will be like someone who lives at a river bank and still washes his/her hand with spittle.

Have a wonderful international literacy day this 2013