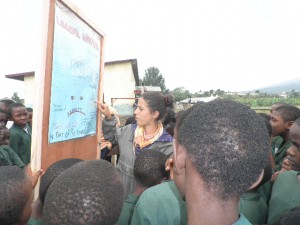 movement. The date is derived in 1962, when President John F. Kennedy first outlined the definition of Consumer Rights and was first observed on 15th March 1963.

This day (including other days closer to or around the day) is an opportunity to promote the basic rights of all consumers, for demanding that those rights are respected and protected, and for protesting the market abuses and social injustices that undermine them. The fundamental aim of WCRD is to bring about important and needed benefits for consumers worldwide.

Every year, consumer organisations around the world unite around a common theme to organize and deliver a collection of campaigning activities to endorse this day. This year’s theme, “Antibiotics Off the Menu”, arises from the overuse of antibiotics in food animal production (which uses around half of antibiotics (human medicine) produced globally, with much of it utilized to promote faster growth and prevent, rather than treat diseases).

Consumers International-an international consumers’ movement- underscores that, the excessive use of antibiotics in food animals is noxious to humans, because it brings about “antibiotic resistance”. This resistance develops in farm animals where bacteria change and become resistant (antibiotics resistant bacteria). These bacteria spread from farms to people through air, soil, water, manure and consumption of contaminated meat and animal products. This issue is developing and rising at a rate or to levels, which cannot be contained by the development of new drugs. The World Health Organisation has warned that, without urgent action, we are heading for a post-antibiotic era, in which important medicines stop working and common infections and minor injuries (simple cuts and scrapes) can once again kill.

This year Green Cameroon joins the global international consumers’ movement to promote this day and campaign against the overuse of antibiotics in agriculture. We intend to do so through inspiring and sensitising consumers on their basic consumer rights, which include:

Furthermore, we encourage consumers to get involved in questioning the safety of food (meat) produced from animals (including birds) administered high doses of antibiotics and gain knowledge on health implications on antibiotics resistance. Farmers also have an important role to play by giving fewer antibiotics to animals.

Let us work in solidarity to combat antibiotic resistant bacteria, which travels across national boundaries in myriad ways. This is a global crisis and Green Cameroon solicits businesses, civil society and consumers to join the campaign on tackling antibiotics resistance.

Let’s note that, government action alone however will not be enough.

Be Part of The Change!!!