The national Olympic day is a day dedicated to sports and health. It is an annual event celebrated every June 23th in which thousands of people both 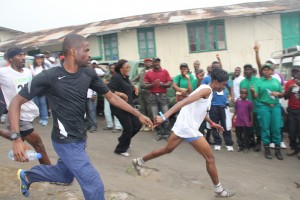 young and old gets to participate in sporting and cultural activities. Such as running, Dancing,  music, exhibitions and educational seminars. This events helps to spread the Olympic idea across the globe and inspire everyone to be their best selves.

The theme for this year’s 2021 Olympic day is Stay Healthy, Stay Strong, Stay Active with the Olympic Day workout on 23 June. Olympians from all over the world have been wonderful with their enthusiasm and determination to keep the world active, healthy and alive through its darkest moments (covid 19 lockdown), athletes have been assisting fans cope with the crisis by sharing their daily routine workouts as well as tips for remaining physically fit and healthy throughout the lockdown, the Olympic channel created a brand new home exercise video featuring Olympic competitors in the run up to Olympic day. Some countries have incorporated this event into their school curriculum and several organizations such as Green Cameroon have carried out educational campaigns and seminars to educate communities about the world Olympic day. The national Olympic day is

an open invitation for everyone around the world to be active. National Olympic Communities around the world are getting creative with their efforts and basing them on three pillars ‘move’, ‘learn’ and ‘discover’. With their Moto being “to engage everybody irrespective of age, gender, or any other factor that can become the cause of disparity among the participants”. In recent years they have added concerts and other exhibitions to the celebration, meetings for children and youths with top athletes and developing a website to direct people to programs in their neighborhoods, making it easy for everyone to be part of the Olympic day.

One most not be an Olympian to participate in the Olympic day. Green Cameroon in its educational campaign on the world’s Olympic day is urging individuals of all ages to make sports an important part of their lives not just to live strong, healthy, active and fit but also because sports conveys peace messages through fair play.