War over sand? Hardly conceivable, given the abundance of sand all over our planet. This may be true, but unfortunately, desert sand is not suitable 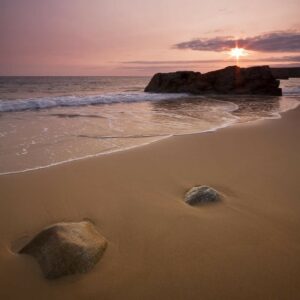 for construction purposes, rendering it economically useless. And the sand which does have the right properties for building really is going to become scarce in the foreseeable future.

Each year, 50 billion tons of sand is used world-wide, and its consumption has risen threefold over the last 20 years. Half of this sand comes from natural sources, while the remaining half is mechanically manufactured from recycling material and ground stones. The reason for the boom in demand is unrestrained building across the world. It has turned sand into a very valuable natural resource. This became clear during a discussion round of specialists organised by the Friedrich Naumann Foundation, Berlin/Germany, in cooperation with, among others, the development organisation Engagement Global, Bonn, and the “Katholisches Bildungswerk Stuttgart”, held in Stuttgart, Germany, in late October 2020.
Sand mining harms the environment in the long run

The demand for sand is greatest in the countries of the Global South. Population growth, increasing urbanisation and road-building are the areas in which the largest amounts of sand are used. The vast majority of sand is mined or gained in the countries themselves, usually through artisanal mining, i.e. by small-scale miners, as Louise Gallagher of the United Nations Environmental Programme (UNEP) explained at the meeting. Such artisanal mining is often carried out illegally, as is the case e.g. in Sierra Leone. There, massive sand mining is destroying ecosystems along the coast and the rivers, affecting above all the coastal regions.

The Government of Sierra Leone was now stepping up the sustainable management of resources and developing coastal zone management, reported Paul A. Lamin of the country’s Environmental Authority. The aim was to mine the sand in a manner financially benefiting both the coastal communities and the state. Sand mining was an important income source for the poor rural population. Therefore, Lamin noted, people were mining sand wherever they found it, even if this was illegal.
India: the construction industry’s major sand demand and the predominance of illegal mining

Johanna Beate Wysluch of Deutsche Gesellschaft für Internationale Zusammenarbeit (GIZ), Bonn, demonstrated the significance of sand mining with various examples. India, with its booming construction industry, needed an estimated 1.43 billion tons of sand this year most of which was being mined illegally. Again and again, illegal mining and Mafioso structures were going hand in hand in the sand sector, as an example from the South Indian State of Tamil Nadu showed.

According to Wysluchs, a single family of large-scale entrepreneurs had been illegally mining sand here which contains rare earths and minerals which can also be used in nuclear weapons programmes and were exporting it, also to Europe. This scandal surfaced in 2017, Wysluch informed the meeting. Not only did illegal mining result in the state losing around 2.7 billion dollars in tax revenue, massive environmental damage was caused as well, ultimately leading to the people living in the mining areas having to leave their homes.

After the scandal, the government banned artisanal sand mining and imposed a ban on sand exports for Tamil Nadu as well.

As the GIZ expert further explained, illegal sand mining was also to blame for massive environmental damage in Indonesia. Illegally mined sand had been exported on a large scale to Singapore for decades. It has been estimated that because of this illegal sand mining, at least 24 islands have disappeared since 1994, whereas the terrestrial area of Singapore has grown by just below a quarter since 1965.
Sand mining as a threat to food security

According to Louise Gallagher of UNEP, sand mining also has an impact on food security. Gallagher explained this describing the example of the Mekong Delta. For millennia, nutrients had been washed into the delta together with the sand, enabling intensive agriculture on the fertile alluvial soils. Massive upstream sand mining was bringing this system out of balance and thus threatening the food security of the people living there, Gallagher maintained at the meeting. Furthermore, owing to the lack of sand, the delta was retreating, raising the threat of flooding along the coast.

Again and again, sand mining along rivers is leading to conflicts over use, as is the case in India, a country discussed at the meeting in this respect. One example here was sand mining along the Yamuna River creating a use conflict with agriculture, since the sand was being mined in fields then rendered useless for food production.

On the other hand, as Paul A. Lamin reported from Sierra Leone, sand mining was an important source of income for the rural population. For many young men in rural regions, sand mining is the only employment option.
Regulation and good governance needed

The round of experts in Stuttgart made it clear that the central problem was poor or even absence of regulation in the sand sector and the mining sector as a whole. Such regulation is the precondition for transparent and responsible mining of sand, so that it can make a positive contribution to the living conditions of local people in the mining areas. See More…