Green Cameroon on the Farmer Innovation Fair in Cameroon 20201 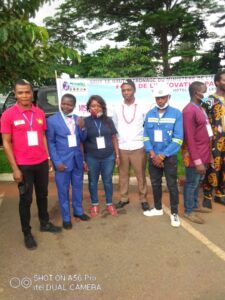 On the 26th of May 2021, the South West delegation of innovators in agriculture, left the region for Yaounde after being selected to represent the region at the Farmers Innovation Fair in Cameroon scheduled to take place from the 27th to the 29th of May, 2021.  The delegation comprised of five innovators in agriculture namely, Teboh Ndika  Bright with his innovation being, a Mechanical Maize and Beans planter, Ngainkou Pauli Chanceline with her innovation being Pineapple Wine, Micheal Ambe Ngwa, with innovation being Organic Insect Repellant,  Evambe Thompson Atra with innovation as Honey wine(Mead) and Tekwe Albert Formuwot with innovation being Plantain and Cassava Flour.  The group was headed by Chief Masango Sone the Director of Green Cameroon acting as regional coordinator of the project, in charge of sourcing and selection of innovations for the South West Region.

The Farmer Innovation Fair in Cameroon (FIPAC) was organized by the PROLINOVA Cameroon Network with the aim of promoting local innovation processes in Cameroon, by identifying farmer innovations and engaging in farmer led joint research.  Local innovation in this context is seen as the process of developing locally new and better ways of doing things. The project consisted of two phases, with phase one being the sourcing and selection of innovations at regional levels and phase two involving bringing together, selected innovations from all ten regions to compete for prizes, recognition and showcase their innovation to the entire world. It was also intended to serve as an opportunity to showcase famer’s creativity and a tool for advocacy/ lobbying to open doors that inhibit the ability of farmers towards seeking solution to their problems, networking and other forms of exchanges. 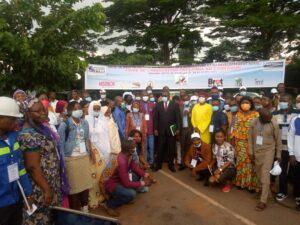 Upon arrival in Yaounde, the South West delegation joined the others from nine other regions of the country where they were allocated stands for showcasing their innovations and receive all interested persons who visited for 3 days. Among the distinguished visitors of the stands can be sighted the Honorable Minister of Agriculture and Rural Development Mr.  MBAIROBE Gabriel who personally made himself available and found time to talk (one on one) with each innovator, receiving appeals, making recommendations and giving advice as to the way forward.

At the end of the 3 days, in the presence of the Minister of Agriculture and Rural Development, the result of the competition was read and out of 14 prices in total for the entire nation, the South West Delegation received two and was ranked in second position out of the ten regions. The prices were personally handed to Mr. Teboh Ndika Bright and Mr.  Ambe Micheal Ngwa Who received on behalf of the entire South West Team.

Upon their return to the region, the team paid a visit to the Regional Delegate of Scientific Research and Innovation Dr. George Mafany, to thank him for all the advice, guidance and coaching he gave them on how to present their innovation and to inform him of the successful outcome. The Delegate was very delighted to receive the winning team and encouraged all members to continue working as one.